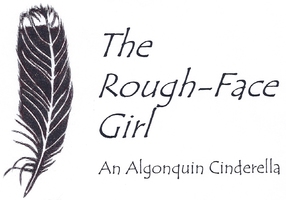 at the start of Scene 2.

Scene 1 of The Rough-Face Girl mp3

Scene 2 of The Rough-Face Girl mp3

and start of Scene 4

YouTube video of Scene 4 continued, and part of Scene 5,

including most of I have only broken shells duet.

Scene 4 of The Rough-Face Girl mp3

YouTube video of Scene 5 continued and part of Scene 6

Scene 5 of The Rough-Face Girl mp3

Scene 6 of The Rough-Face Girl mp3

Finale of The Rough-Face Girl mp3

The Rough-Face Girl: An Algonquin Cinderella

A Cinderella story with a twist, The Rough-Face Girl tells the tale of a native American girl - her face scarred from keeping the fire - who sees things that others can't and who goes on a quest to marry the Invisible Being, finding healing in the process.

Opera / Music Drama in one act for 6 female singers, keyboard, flute and percussion

Lyrics and Music by Gabriella Snyder

The opera was premiered by Mass Theatrica in 2009, directed by Angeliki Theoharis, with Stephanie Mann as Rough-Face Girl, Bethany Tammaro Condon as the Mother, and Angeliki Theoharis as Medicine Woman. A revised expanded production, staged by Brenda Huggins, was created specifically for the K-8th grade students of the Malden afterschool program run by the Partnership for Community Schools in Malden, and performed on January 30, 2012 at the Beebe School in Malden. This performance was supported in part by a grant from the Malden Cultural Council, a local agency which is supported by the Massachusetts Cultural Council, a state agency.

Scene 1  The Great Wigwam of the Invisible Being

Scene 1 of The Rough-Face Girl mp3

Long ago, in a village on the shores of Lake Ontario, lived Rough-Face Girl with her two sisters and mother. One day they learn that a rich, powerful and handsome man, the Invisible Being, is seeking a wife. He lives with his sister, Medicine Woman, in a Great Wigwam far away on the shores of the lake. Medicine Woman has invited the people of the forest to a feast and explains that only the woman who can see her brother can marry him.

Scene 2  The simple wigwam of Rough-Face Girl, her mother and sisters

Scene 2 of The Rough-Face Girl mp3

The sisters of Rough-Face Girl each want to marry the Invisible Being, so they ask their mother for beautiful clothing to wear. They laugh at Rough-Face Girl when she tries to join in, taunting her because her face, hands and hair are burnt and scarred from tending the fire.

Scene 3  In the forest

SOLO: “Now all my singing dreams are gone” – RFG

SOLO: “The mighty bobcat hunted me for days” – Maht

Scene 4 of The Rough-Face Girl mp3

The sisters set off for the Great Wigwam of the Invisible Being. When they get there they meet Medicine Woman, who wants to know if they have seen her brother. They say they have, but can’t answer her riddles: “What is his bow made of? What is his sled made of?" Even when Medicine Woman lets them sit in the Great Wigwam and watch for the Invisible Being they can’t see him. They run off, terrified.

Scene 5 of The Rough-Face Girl mp3

Rough-Face Girl decides to ask her mother for a beautiful dress, necklace, moccasins and feathers so she can try to marry the Invisible Being. Sadly, her mother says she has nothing left to give her but birch bark, broken shells and her own worn-out moccasins. Rough-Face Girl takes these and makes a necklace and dress, carving on her bark dress pictures of the sun, moon, stars, plants, trees, and animals. With Mahtigwess’ help, she sets off through the forest, even though her sisters continue to ridicule her.

DUET: “I have only broken shells to give you” – RFG, Moth

Scene 6 of The Rough-Face Girl mp3

Rough-Face Girl finds peace in her journey through the forest and marvels at how she can see the Invisible Being everywhere she looks. When she arrives at the Great Wigwam, Rough-Face Girl meets Medicine Woman and easily answer’s her riddles. Medicine Woman tells Rough-Face Girl that she’s the woman her brother has been searching for. Medicine Woman gives her beautiful shells and clothing and tells her to bathe in the great lake. There, her skin is healed and her hair restored and she becomes beautiful again. Rough-Face Girl’s family realizes that she has always been beautiful and wise. They say good-bye to her as she gets ready for her wedding, saying “Go to him. You will never be parted from him.”

SOLO: “As the sun sinks behind the ancient hills” – MW with RFG

Finale of The Rough-Face Girl mp3

CHORUS: “May the Great Spirit give you light” – Entire cast

Malden - An idea local composer Gabriella Snyder had for an opera musical a decade ago will come to fruition this weekend when the world premiere of “The Rough-Face Girl: An Algonquin Cinderella” hits the stage at First Parish in Malden.

Ten years ago, Snyder, who has been a resident of Malden since 1984, had been interested in writing a musical/opera drama that would be a piece of musical theater that would be accessible to the masses. Her opera would be a narrative and in English.

She began researching all areas of storytelling, from Vietnamese folktales to Greek mythology. “I happened upon the book ‘The Rough-Face Girl’ in the children’s section of a book store,” said Snyder. “It was in simple form with beautiful illustrations. I fell in love with the drawings.”

The story, which she describes as a Native American Cinderella tale, stuck in Snyder’s mind — how the book featured a female protagonist as well as its use of spiritual connections. “I thought, ‘This is the kind of theme I would like to write if I could just figure out how,’” she said.

Being a composer, she was comfortable writing the music, but felt she needed someone to collaborate on the lyrics. Not able to connect with the right lyricist, the project was shelved and Snyder wrote a completely different work.

It wasn’t until a trip to the Grand Canyon seven years later that Snyder found the inspiration to tackle the project alone. It was 2006 and Snyder was visiting the site with her sister and her children. She found herself alone on a trail that brought her to the brink of an inner canyon.

“A giant raven was sitting right in front of me on a rock, and I began to hear up in the cliffs the beautiful sound of the Native American flute,” she said. “It brought me back to the project that I had wanted to work on years ago, and I began to write the piece in my sister’s car on the way home.”

For the lyrics, Snyder said she did a lot of research on different Native American tribes, primarily the Algonquin, on which this story is based.

“The Rough-Face Girl” is the story of a Native American girl, her face burned and scarred from tending the fire, who sees things that others can’t, and who goes on a quest to marry the Invisible Being, finding healing in the process.

“Usually, in mythology and fairy tales, it is young men who go out to answer riddles and slay dragons in order to win their lady’s hand in marriage,” said Snyder, noting that this story drew her because of the female taking on a male role as the protagonist.

Snyder started composing when she was 15 years old because she felt like there were things in music that she didn’t see, so she started writing in secret, hiding her notes. She hid because she felt she was under the shadow of all the great composers, such as Mozart, and if she couldn’t write at that level, why bother.

Then she happened to see a magazine article with a quote from a famous violinist responding to the question of why there aren’t women composers. The answer propelled Snyder out of hiding.

“From what I remember, he said, ‘Women are destined to plow the same ground over and over. Not to innovate, but to go in an established path,’” she said.

Growing up in upstate New York in a family of five girls and no boys, Snyder never felt there was anything that a boy could do that a girl could not.

“It never occurred to me,” she said, adding that the words of the violinist shocked her. So, she said, she mulled it over and decided the best way to fight this was to prove them wrong.

In “The Rough-Face Girl,” the female protagonist undertakes a quest that requires wisdom and courage — traits that Snyder feels should be modeled to young girls and women. Also, she said, the Cinderella story is also atypical in that it is not her physical beauty that gets her the man; it is her vision and wisdom. The “Invisible Being” will only marry the woman who can see him.

Unlike her sisters, “The Rough-Face Girl” doesn’t see superficial things in the “Being,” such as his power and money. Instead she sees “the heart of things, their nature, their truth.”

When writing the lyrics, Snyder took the simple book and expanded it, bringing in more in-depth characters and changing all the male roles to women characters. The only male in the opera is the “Being,” which is an invisible spirit and played only by voice. This way, she said, an all-women opera group could easily put on this production.

Snyder finished composing and writing the one-act, six-scene opera in mid-2007 and began applying for grants, which she received from the Massachusetts Cultural Council. Scores were given to the cast in May, who then only had eight rehearsals to get the staging perfected.

This weekend before the Malden performance, Snyder will be giving a brief lecture, not only to talk about the creative process, but also to give the audience a road map to what they will hear and see. “I am really positive about it,” she said of the final outcome, which was written with an ensemble of only a piano, drummer and flute player, and a small chorus.

Snyder said there are no other productions planned at the moment, however, she is looking to premiere “The Rough-Face Girl” in other locations. Since this was her first attempt at being both the composer and the lyricist, Snyder said she was excited to see how well the elements she chose flowed together. “They are really working and effective,” she said.” I am really relieved and happy.” She also commended the producers, cast and crew who were committed to the genre and were wonderful to work with.