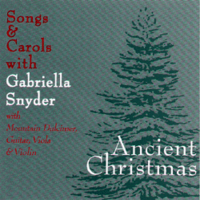 Give the gift of music at Christmas with this beautiful CD

Reviving traditional songs & carols -- and bringing new music to life -- are hallmarks of Gabriella Snyder's Ancient Christmas - Songs & Carols. This holiday album presents an enchanting collection of Christmas music to help you celebrate the season with family and friends. So get cozy in front of the fire and enjoy the soothing warmth and sparkle of these special songs.

The intricate play of instruments makes this holiday CD shimmer -- with Myra Franks on fiddle and 5-string viola, Steve McWhirk on guitar, and Gabriella Snyder on mountain dulcimer and lead vocals. The result, Ancient Christmas - Songs & Carols, showcases many rarely-heard carols from the Appalachian mountains, the native American Huron tribe, Ireland, England and France -- from Medieval times to the present.

"The title is Ancient Christmas, a title which describes the contents of this work without quite doing justice. I might have named it Come With Me--the title of Gabriella Snyder's excellent original Christmas song--because the title of this song better conveys her mission: leading us on a quest to discover Christmas through ancient and traditional carols. I appreciated her song for its authenticity and truth, as well as enjoying the renaissance flavor of the entire CD. With Ms. Snyder on hammer dulcimer [sic], Steve McWhirk on guitar, and Myra Franks on violin and viola, the string arrangements splendidly evoke the "ancient" mood of the eleven selections, many of which were unknown to me. I appreciate toe-tapping seasonal melodies, so my favorite tune was Stars of Glory, a moody, celtic arrangement whose viola part particularly moved me. Ancient Christmas is a well-conceived effort, taking listeners on a unique journey through several centuries of caroling. Come with me, Ms. Snyder seems to say, and listen to the music I love. I'll come with you!"     - Richard Keith Banks

The Coventry Carol - Listen to the mp3
(Music: Traditional English, 1591
Words: Robert Croo, 1534)
Written and performed by members of the Shearman and Tailors' Guild in England, this carol tells the Christmas story as part of a Medieval mystery and miracle play.

The Cherry Tree Carol - Listen to the mp3
(Traditional Appalachian from Kentucky)
One of my favorites, this is an old English air which pioneers in the Appalachian mountains changed into a number of distinctly American variants. I play a version of this ballad passed down through the Scottish ancestors in Kentucky of folk artist, Jean Ritchie.

European Medley - Listen to the mp3
(Traditional French, 18th c., Il Est Ne, Bamberger Gesangbuch, 1670, Lieb Nachtigall)
These two folk songs - one from France, one from Germany - seem to match perfectly. The first proclaims: "He is born, the Holy Child, play on the pipe and make merry music!" The second: "Dear nightingale, wake up! And from the boughs of every tree come sing the news most joyfully. Awake, dear bird, awake!"

Come With Me - Listen to the mp3
(Music and Words: c 1996 by Gabriella Snyder,
Colla Voce Rec. & Publ.)
I wanted to write a Little Drummer Boy type song, with the wise men hearing about the newborn King and setting out to find Him. I hope this takes you on that journey.

Blessed Be That Maid Marie - Listen to the mp3
(Music: William Ballet's Lute Book
Words: Traditional English)
This is a wonderful Renaissance dance, stately and full of vigor!

Stars of Glory - Listen to the mp3
(Traditional Celtic)
The legendary Celtic gift for melodies of haunting beauty makes this carol a timeless gem.

I Heard the Voice - Listen to the mp3
(Music: Thomas Tallis, 1505-1585, The Third Tune
Words: Horatius Bonar, 1808-1889)
The Third Tune of Tallis is irresistible for singers and musicians. Although Bonar's poem is not specifically for Christmas, his phrase "I am this dark world's light" immediately made me think of Epiphany - the celebration of the light of Christ appearing in the world, symbolized by the star appearing to the shepherds and wise men.

Christ Was Born in Bethlehem - Listen to the mp3
(Traditional Appalachian from North Carolina
Additional Words: c 1996 by Gabriella Snyder, Colla Voce Rec. & Publ.)
The original version of this tune, recorded in 1918 by Cecil Sharp in his book English Folk Songs From the Southern Appalachians, only has one verse - the first - pertaining to Christmas. I liked this tune so much - it's a classic mountain dulcimer piece - that I wrote four more verses, basing them on the gospel of Luke.

On This Day - Listen to the mp3
(Music and Words: from Piae Cantiones, 1582)
The quintessential Renaissance celebration!

These holiday songs & carols are drawn from centuries of music, integrating the artistry of the mountain dulcimer, guitar, violin and viola into an unforgettable musical offering!

To order by check or money order from Gabriella Snyder, send payment to:

Price is $6 per CD. Free shipping!

Here's the Order Form to mail in with your Check or Money Order:

Yes! I want to order_____copy(ies) of the CD Ancient Christmas - Songs & Carols.