Prince of Peace - A Passion Play

Listen to some excerpts of "Prince of Peace" recorded live at St. Paul's Cathedral in Boston:

Crucifixion and "My God, my God, why have you abandoned me?"

Gabriella Snyder's three-act music drama, Prince of Peace - A Passion Play, based upon a play by award-winning poet Catherine de Vinck, retells the story of Christ's trials, crucifixion and resurrection, contrasting Christ's message of peace and reconciliation with the world's history of war and judgment.

Snyder's vocal lines are highly singable and supremely dramatic. Rhythmic and melodic motifs are woven throughout the drama, reiterating themes of Betrayal, the Law, Teacher, Creator, and Resurrection. The earthy opening chorus "Let us sing" evokes the drunken, lurching dance of a bacchanal with its strong rhythmic pulse pitted against constantly shifting meter. "The Law" -- with its pompous quasi-military march -- captures the oppressive quality of narrow-minded judgment. The "Mourner's Kaddish" combines solo Hebrew chant based on a traditional Jewish model with the chorus's sonorous accompanying phrases in English. The final "Alleluia" chorus is an exuberant celebration of life and resurrection.

Snyder's score features frequent modulations between tonal and modal centers. Dissonant, jagged passages are balanced with rich harmonious sections. She pays homage to the passion plays most frequently heard by contemporary listeners, such as those of  J.S. Bach, with her use of traditional forms like the fugue and passacaglia.

Prince of Peace amplifies in form and substance the miracle and passion plays of Medieval Europe, some of the earliest theatrical works of western music. Snyder first got the idea of composing a musical passion play in 1999. Looking for texts on the internet, she found Catherine de Vinck's theatrical and entirely poetical work -- "A Passion Play" -- synthesizing on all four gospel accounts of the passion. De Vinck's poetry, filled with earthy, real-life characters who have weaknesses, strengths, sufferings and spiritual strivings, attracted Snyder. After calling the award-winning poet at her home in New Jersey, the two began an ongoing, fruitful correspondence.  Snyder finished the work in the Spring of 2002.

In Prince of Peace we see Jesus Christ with a human face, with the victims of war, around the world, and throughout millennia. The passion play recounts the story of Christ's trials and triumph, his persecution and resurrection, and underscores his universal message of peace, forgiveness and love. Despite the challenging themes of war and the inhumanity in the world, the ultimate message of Prince of Peace is one of hope:

The night is over,
the winter is past.
A deathless world emerges
from the sea of transformation
rising to the morning light.

One cannot miss the underlying antiwar theme of de Vinck's original passion play, written and published at the close of the Vietnam War. Her work is direct and unflinching as it characterizes war's inhumanity and brutality. Consider these passages from Act I, as de Vinck envisions Christ's prayers in the garden of Gethsemane before he is arrested:

My God, they are all dying: in open fields,
in ditches, in times of dislocation, of war
the scattered corpses are feasts
for crows and jackals.
Did I fail?

My bones are counted one by one,
sold for ivory, carved into necklaces
for witch doctors and generals.
I die with death without end.

CHORUS:
How long shall we wait? How long?
Even in sleep we see the coming day,
the bitter fruits ripening on the tree.
Yet, we pull our coats over our heads,
move deeper into our animal sleep.

All the lyrics of Prince of Peace are taken directly from de Vinck's play, published in 1975, but a few passages have been updated to call to mind more recent examples of mass terror. For example, consider the narrator's reading at the opening of Act III that precedes the Golgotha scene and a dramatic baritone solo, "My God, My God, Why have You abandoned Me?"

Women of Jerusalem
Do not weep over me:
but if tears must fall, let them flow
over yourselves, over your children.

My sisters, in my dying I sing Kaddish with you.
I am not a God of nowhere, but Myriam's son;
My roots stand firm in your soil, Israel.
But my death grows elsewhere,
hangs in a thousand evil trees.

Whatever the season of the year
time is short, cut like grass
before it reaches grain.
The fruit ripens to be crushed
The man who eats and drinks today
choosing his morsels, rinsing his cup
chokes tomorrow on the dry bone of death.

Peace on Earth? They are coming
across valleys and streams
crossing bridges, burning villages
marching in pride and blood;
not armies of living men, but ghosts
in iron chariots wielding iron spears
hiding behind the power of cannon and gun.
They are coming through the mountain passes
with elephants and tanks.

I die in all places of terror, at all hours
- Rome, Constantinople, Auschwitz,
Hiroshima, Baby-Yar, Mylai, Cambodia, Rwanda,
Kosovo, New York.
Names are tattooed on my flesh
Numbers are carved in my wrists
while the world writes its history
with the iron alphabet of war.

Thomas Merton, Catholic monk and author of the best-selling book, Seven-Story Mountain, wrote in 1966 to Catherine de Vinck saying,  "You have a wonderful Blake-like response to the sacred world." Poet, Denise Levertov, writing in COMMONWEAL, remarked, "de Vinck's eloquent, beautiful, sensual poems convey an underlying hopefulness and often an ecstatic celebration of living." De Vinck's work offers a clarity of vision, an essential message of hope, a perspective that transcends time and space. Her message is amplified and intensified in Snyder's musical setting. 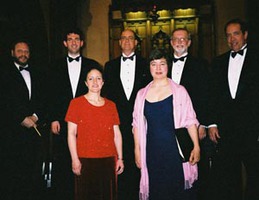